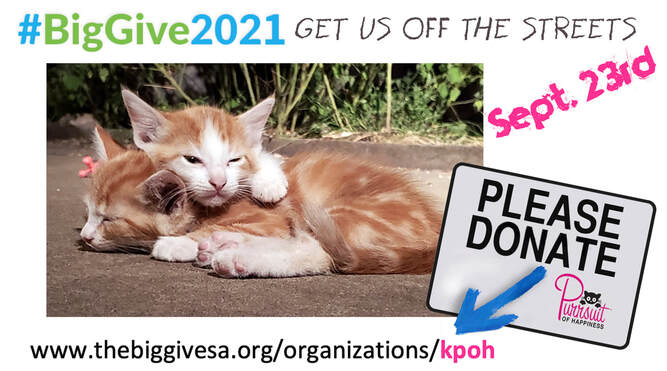 The Big Give SA 2021,  is a special day to create awareness and help charities within the community, and we NEED YOUR SUPPORT!

All donations made through the Big Give will go towards providing food, medication, enrichment items, and other supplies for all the special needs kitties in our care, and those for which we TNR and care for throughout San Antonio and surrounding communities.

You can donate now through September 23 at 11:59 p.m. CDT at :
www.thebiggivesa.org/organizations/kpoh 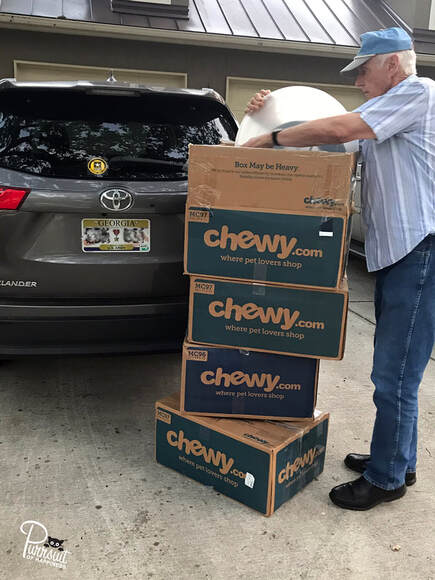 A Kitty's Purrsuit of Happiness may be small in comparison to many larger animal organizations blessed with staff, vast resources and financials, but we always step up and do what we can to help animals in the community, including natural disasters.

Hurricane Ida was a deadly and destructive Category 4 Atlantic hurricane that became the second-most damaging and intense hurricane to strike the U.S. state of Louisiana on record, behind Hurricane Katrina, and is tied for the strongest landfall in the state by maximum winds with Hurricane Laura a year before and the 1856 Last Island hurricane. The storm also caused catastrophic flooding across the Northeastern United States.​
​
Special thanks to SGM (ret) Army Veteran, Wayne, for driving 34 hours to step up to help take supplies from San Antonio, TX to Atlanta, GA.

Learn how you can prepare for disasters!

Rehabilitation with the Help of Allure!

A Heart Felt Thank You to the San Antonio Area Foundation! 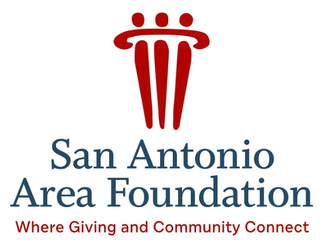 A Kitty's Purrsuit of Happiness is very honored to be a recipient of a $8000.00 grant from The Aid to Helpless Animals Trust and Jesse Wright, Boyd, Jr. Animal Assistance Fund of the San Antonio Area Foundation!
​
The San Antonio Area Foundation has served as the sole, designated community foundation for the San Antonio area for over half a century, growing to become one of the Top 20 foundations in the nation base on asset size. The Area Foundation helps donors achieve their charitable goals, managing more than 500 charitable funds approaching $1 billion in assets. Coordinating efforts with numerous area nonprofits, the Area Foundation serves as a collaborative leader, connecting donors to address key community issues and investing in our future. Since 1964, over $400 million for scholarships and grants have been awarded to enhance the quality of life in our region. Learn more about your community foundation at saafdn.org

​A huge thank you to our supporters who donated for Giving Tuesday!
​Because of YOU, A Kitty's Purrsuit of Happiness raised $1835.00 for Giving Tuesday 2020.
​
Donations can always be made at anytime, and are of course, very appreciated!
​
You can also send a donation via check to:
A Kitty's Purrsuit of Happiness
P.O. Box 1011
Spring Branch, TX 78070

We do what we do each and every day for the cats that do not have a voice, the ones that depend on us for their survival. We must speak up and ask for them, as not every animal is treated with kindness. And while these animals often go unseen, their suffering is very real.

Thank you to all the donors who helped with this spay/neuter campaign in October, 2018! KPOH was honored when a volunteer from NY flew down to assist Meow with this huge project. They worked feverishly with the great volunteer staff at the Critter Shack in San Angelo, TX and set a record that day of spaying and neutering 29 kitties and 7 dogs! Eight kitties were lucky to be immediately taken into adoption programs, and special thanks to Austin Pets Alive who were ready for intake as Meow made the long drive directly to their facility. 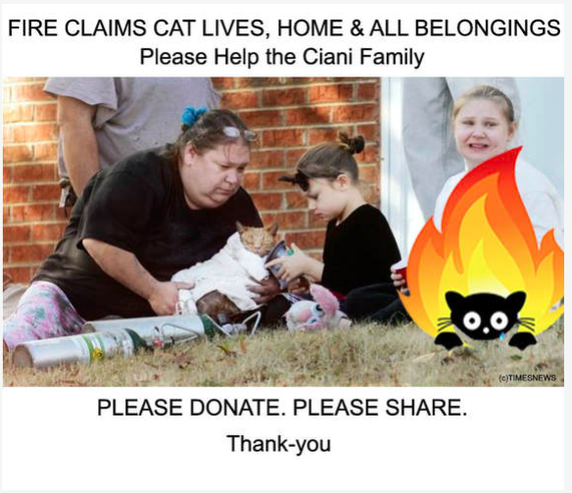 On Super Bowl Sunday 2018, the hit television series, "This is Us" finally revealed how beloved husband and father, Jack Pearson had died as the nation empathetically witnessed how quickly a house fire could change and take lives. For tow of our little "Kiddies Helping Kitties" volunteers Ashley and Autumn Ciani, a tragic house fire during Christmas 2017 was very hauntingly real. Firefighters and the family tried their best to revive the lifeless bodies of their dearly loved pets, but it was too late. Each years, fire fills more Americans than all natural disasters combined. Please help the Ciani Family rebuild after a tragic fire claimed the lives of two of their kitties, Mittens and Halloween, all of their belongings and home. Ashley and Autumn have been volunteers in our "Kiddies Helping Kitties" program for over five years and have grown up to be avid animal caretakers! The news of the fire was featured in the Times News.

During the devastation of Hurricane Harvey 2017, KPOH.org accommodated 16 more kitties, including 11 which we physically rescued in Houston, TX and brought back to our sanctuary. A few of the kitties were returned to back Houston once rebuilding and construction was completed, but the others remained within our sanctuary. 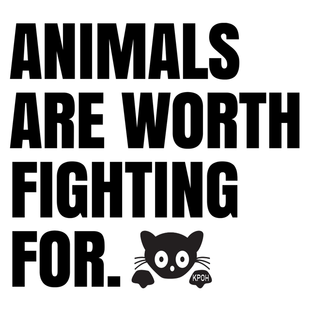 ​WOAI NBC News San Antonio News 4 - Deer culling has been occurring in River Crossing, Spring Branch, TX (Comal county). It is an inhumane deer slaughter program put into effect by the River Crossing POA to appease a few residents who hunt, and justify to kill innocent animals, pay higher POA fees as opposed to taking a few effortless steps to deter deer from their property (which was the original natural habitat for deer to begin with) . This has upset MANY compassionate, reasonable residents who appreciate the beauty and tranquility of the deer, and realize that killing is not only ineffective, cruel, but also is extremely distressing in plain view in neighborhoods, upsetting young children and adults alike.

​WARNING GRAPHIC CONTENT - Watch one of many inhumane videos - Special thanks to the Wildlife Rehabilitation and Rescue (WRR)  and Citizens Advocate for Animals (CAFA ) KEYE CBS News Austin who joined forces with KPOH's founder to provide education and humane alternatives for the deer. The River Crossing POA has put a temporary hold on killing the deer until further notice, but our friends with CAFA who captured this video on March 8th, 2018 are presently fighting to bring this to an end. Please be a voice for animals in your community! ​Violence is NEVER a solution!

Once In a Lifetime Event - George Strait! 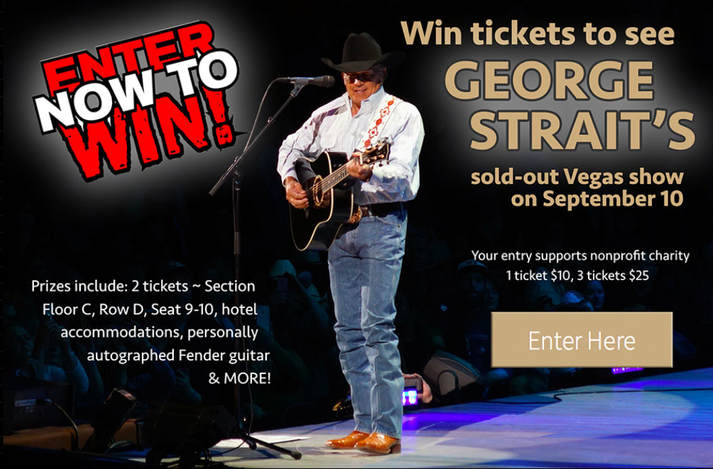 KPOH.org featured a once in a life-time special event raffle with two amazing floor center 3rd row seat tickets & 2 night stay hotel accommodations at the MGM Grand to see the king of country & entertainer of the year, two years in a row George Strait live in his sold out "Strait to Vegas" concert on September 10th, 2016.  A personally signed autographed Fender guitar package by George Strait was also awarded to the lucky first place winner!

Thank you to all who help us raise much needed funds through this rare, incredible opportunity! On March 22, 2018, George Strait was awarded "Texan of the Year" for his efforts of nationally raising millions of dollars for the victims of Hurricane Harvey. 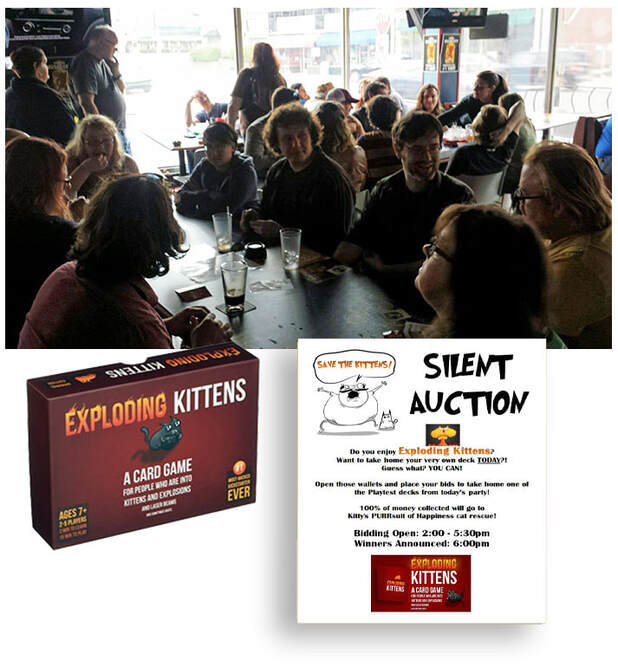 A Kitty's Purrsuit of Happiness was featured in a kick starter campaign "Exploding Kittens" for the state of Tennessee. Everyone had a great time and absolutely no kitties were present nor ever hurt in this event or card game!